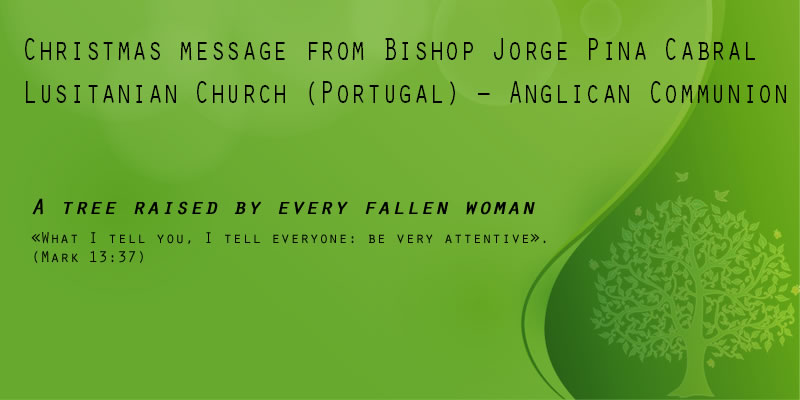 A tree raised by every fallen woman
«What I tell you, I tell everyone: be very attentive». (Mark 13:37)

The ritual was performed 18 times, as many as the assassinated woman in Portugal since the beginning of year 2017 by their husbands, companions and boyfriends.  It begun referring names and ages of the victims, then the date and the context of their death. Then after this and in a symbolic way, a purple band (Advents Liturgical Color) was tied by a women around a small tree planted in a vase. A tree for each assassinated women and then with a screaming voice a prayer was raised in the air them: “A tree raised by every fallen woman”. Symbolically, the trees are oaks. A strong and resistant to fires and to various kinds of tempests autochthonousspecie evoking the resistance and the fight of many women, that for years and years resisted to various forms of violence in their lives.

This public ceremony, right in the center of the city of Porto, was prepared and directed by women. He impressed me with their dignity, determination and organization. They were only a small handful of women, but they were determined to evoke the lives and memories of other women. There, in the middle of the public square, they gave their testimony and exposed their feelings and emotions and their firm intention to put an end to violence against Women, since it was a matter of human rights, dignity and justice.

A few days before the beginning of the Advent liturgical season and in the midst of the campaign [#16diasativismo2017] this event alerted me to the way in which we let, or not, ourselves be challenged by the many and repeated signs God places in our daily lives. The active vigilance of Advent Time requires the ability, or if we want, the sensitivity, to allow ourselves to be challenged by others and by the way God is present in His action. Daily life, with its many life experiences, is the natural context of our experience of faith and the ever renewed opportunity to welcome and recognize God in His various signs and manifestations.

The simple and the humble, often outside the religious scheme and even outside the ambience of the Churches, are the chosen ones to receive the revelation of God. So it was with the shepherds of Bethlehem, who were the poor and the homeless of that time (Luke 2: 8-20). It was to them that the angel went and it was for them that for the first time the good news of the boy God was announced. They sang praises to God for everything they had heard and seen (verse 20).

Celebrating Christmas is also being able to take on and live a spirituality that assumes the sorrows and groans all around us. A Christmas holiday spirituality capable of listening the voice of other, even if they have a different accent and speech than what we usually hear in the backwater of our Churches. Truly, the incarnation of God in the child Jesus makes life the natural place of divine revelation and sanctifies each person. In the humanity of Jesus, all humanity was blessed by God. To disfigure the face of the victims of violence is God himself who is disfigured. In their death is God who is crucified.

Believing in the incarnation and celebrating it every Christmas is, therefore, a renewed commitment not only to the one who is the Life, Jesus Christ, but also to life itself, which in its essence is the space and time of God's theophany together with men and women. Let us celebrate the birth of Jesus without forgetting the deaths and pain caused by human sin. May the sense of hope and of eternity that each Christmas bring us reassure us in the mission to which we are called, for the glory of God and for the good of humanity.

A Holy Christmas to all and a blessed year of 2018!